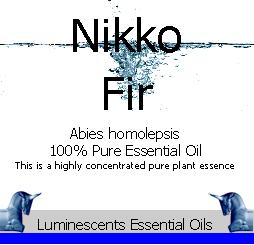 Abies homolepis, from which Nikko Fir essential oil is distilled (called urajiro-momi in Japan) is a native to the mountains of central and southern Honshū and Shikoku, provinces in Japan. It grows at altitudes of between 700–2,200 metres, often in temperate rain forest with high rainfall and cool, humid summers, with heavy winter snowfall.

It is a medium-sized to large evergreen coniferous tree growing to 30–40 metres in height with a large trunk diameter of up to 1.5 m. The leaves are needle-like and  flattened around 1.5–3.5 cm long and 2–3 mm wide by 0.5 mm thick, glossy green above, and with two white bands of stomata below, and rounded or slightly notched at the tip.

The leaf arrangement is spiral on the shoot, but with each leaf variably twisted at the base so they lie partially flattened to either side of and above the shoot, with few below the shoot. The shoots are yellow-buff, glabrous, and often conspicuously grooved. The cones are 6–12 cm long and 3–4 cm broad, purple-blue before maturity; the scale bracts are short, and hidden in the closed cone. The winged seeds are released when the cones disintegrate at maturity about at about 6–7 months after pollination.

essential oil is distilled urajiro-momi) is a fir native to the mountains of central and southern Honshū and Shikoku, Japan. It grows at altitudes of 700–2,200 m, often in temperate rain forest with high rainfall and cool, humid summers, and heavy winter snowfall.