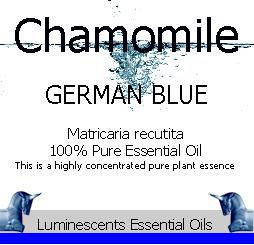 German Blue Chamomile grows all over Europe and temperate Asia. It was widely introduced in temperate North America and Australia. As the seeds need open soil to survive, it often grows near roads, around landfills and in cultivated fields as a weed.

The branched stem is erect and smooth and grows to a height of 15-60 cm. The long and narrow leaves are bipinnate or tripinnate. The flowers are borne in paniculate capitula. The white ray florets are furnished with a ligule, while the disc florets are yellow. The hollow receptacle is swollen and lacks scales. This property distinguished German Chamomile from Corn Chamomile (Anthemis arvensis), which has a receptacle with scales. The flowers have a strong, aromatic smell, and bloom in June and July.

The primary active ingredient of the essential oil from German Chamomile is bisabolol.

analgesic, anti-spasmodic, antibiotic, anti-inflammatory, emmenagogue, digestive, hepatic and vulnerary. German Chamomile contains Azulene, a powerful anti-inflammatory agent. This blue crystal is not actually present in the plant, but forms in the oil and only a small quantity is needed. The quality is generally graded by the azulene content and good quality oil should contain between 4.5  5%. It is this azulene that gives it a blue colour.

German Chamomile as a herb is used against sore stomach, irritable bowel syndrome, and as a gentle sleep aid. It can be taken as an herbal tea, two teaspoons of dried flower per cup of tea. For a sore stomach, some recommend taking a cup every morning without food for two to three months. It is also used as a mouthwash against oral mucositis.