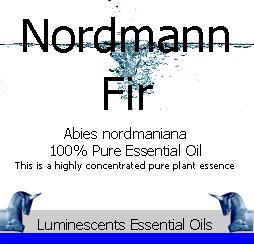 SCENT: Nordmann Fir Needle essential oil has a fresh, woody, earthy, sweet scent that is much like woodland after the rain.

The Nordmann Fir (Abies nordmaniana) is a species of fir native to the mountains around the Black Sea, The Russian Caucasus, Armenia and Georgia.

There are two subspecies (treated as distinct species by some botanists), intergrading where they meet in northern Turkey at about 36°E longitude:

Its probably the most popular of all the firs for Christmas trees with needles that are not sharp and do not drop readily when the tree dries out and whilst the essential oil made from it is rare and very difficult to find, it is occasionally available. It has no specific aromatherapy or perfumery attributes as the other firs more readily available throughout Europe and the North American Continent fulfil expectations more easily.

It is also an extremely popular ornamental tree in parks and large gardens, and along with the cultivar Golden Spreader and has gained the Royal Horticultural Society’s Award of Garden Merit.

The tree is also used extensively in Europe been for reforestation as a way to mitigate expected forest decline caused by climate changes.

History of the Nordmann Fir:-

The species is named by Christian von Steven after his compatriot and friend, the Finnish zoologist Alexander von Nordmann (1803–1866), who was the director of the Odessa Botanical Gardens at the time.