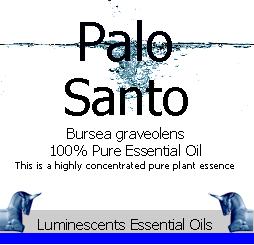 SCENT: Palo Santo has a rich and deep, penetrating aroma with a light citrus chord and a discernable note of mint.

Palo Santo sometimes known as Holy Wood is from the same family as Frankincense and Myrrh. The bark and oil from the Palo Santo tree are highly prized and it is traditionally burned in South America for the purpose of clearing negative energies from living spaces. The oil can be used in prayer and meditation and is of increasing interest.

Vapourised as a meditative aid and the wood burnt as an aromatic. The oil is used in cosmetics and traditionally as an aid for rheumatism.

The use of Palo Santo which grows from the Mexican penisula and throughout the many regions of the South American continent is reported to be traditional in South America, especially in Ecuador (which is where this product is obtained).