View basket “Marigold Flowers (Powdered) – Calendula officinalis” has been added to your basket. 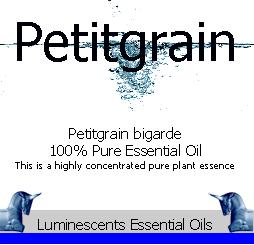 Petitgrain bigarde is native to Southeast Asia. The tree now grows throughout the Mediterranean and sub-tropic areas worldwide. Its a type of bitter orange tree that provides the the Essential Oil is also the source of Bitter Orange Oil and Neroli Oil. The main areas of world production are Paraguay and France. Oil produced in Paraguay is generally considered to have a longer lasting fragrance.

Although the oil is distilled from the same source tree as Bitter Orange Oil and Neroli it has its own distinctive characteristics and is closer in characetr to Neroli than the citrus fragrance of Bitter Orange.

The essential oil is believed to have uplifting properties. Aromatherapists have long used it to calm anger and stress, while it has been used in the skin care industry for acne, oily skin, and as a deodorizing agent and it is used in the perfume industry extensively.

Originally the oil was produced in distilleries from the unripe oranges when they were the size of cherries. This explains why it is named petitgrain  which in French means little grains. Nonetheless, this proved to be uneconomical and so the oil began being extracted from the leaves and twigs of the orange tree instead which it has been ever since.