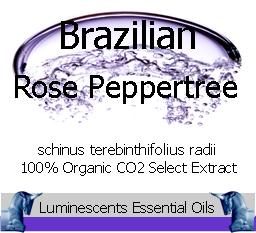 It is a native of tropical SE Brazil, northern Argentina, and Paraguay and is related to the Pink Pepper which is Schinus molle although this product is from our range of Madagascan grown oils.

Is a sprawling small tree, with a shallow root system, reaching a height of 7–10 metres. The branches can be upright, reclining, or nearly vine-like, all on the same plant. It produces pinkish corns just like its cousin which are sold as pink peppercorns.

The oil is dominated by monterpenes and sesquiterpenes, with alpha-cadinol as one of the major oxygenated compounds. The oil has found a use in perfumery as it brings diffusivity, adds a creamy aspect, and blends well with musks.

In the United States, it has been introduced to California, Texas, Hawaii, Arizona, Nevada, Louisiana and more recently Florida. Planted originally as an ornamental outside of its native range, Brazilian pepper has become widespread and is considered an invasive species  in many subtropical regions with moderate to high rainfall, including parts or all of Australia, the Bahamas, Bermuda, southern China, Cuba, Fiji, French Polynesia, Guam, Hawaii, Malta, the Marshall Islands, Mauritius, New Caledonia, New Zealand, Norfolk Island, Puerto Rico, Réunion, South Africa, and the United States itself. In drier areas, such as Israel and southern California, it is also grown, but has not generally proved invasive.

Brazilian pepper is hard to control because it produces basal shoots if the trunk is cut. Trees also produce abundant seeds that are eaten and dispersed by birds and ants.