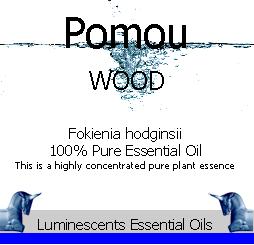 Fokienia hodginsii from which Pomouwood Essential Oil is distilled is also known as Fujian Cypress, Siam Wood, Coffin Wood  and sometimes spelt Pemou or Pom Mu Wood and is a species of cypress native to southwestern and central China Laos and Vietnam.

The name derives from the old Romanised name of Fujian province, China, from where the first specimen was introduced to Europe, collected by a certain Captain Hodgins in 1908.

It is an evergreen tree which can grow from between 25 metres and 30 metres in height. The tree greyish-brownish bark that peels off when the trees are juvenile. On older trees, the bark presents longitudinal fissures and becomes quite aromatic. The leaves are arranged in flattened branchlet systems, with the branchlets in one plane. The leaves on adult trees are in opposite decussate pairs, the alternating pairs not evenly spaced so appearing as whorls of 4 at the same level; they are sub-acute, about 2–5 mm long, glossy green above, and with white stomatal bands below. The lateral leaves are ovate and compressed, and facial leaves are oblanceolate with a triangular apex. On young trees, the leaves are larger, up to 8–10 mm long and 6 mm broad

The female cones are much larger than the male and the tree abhors the shade, referring full and direct sunlight in temperate conditions.

In perfume terms (for which it is primarily used)  it is considered to invaluable for building woody notes, and is considered to be a cheaper alternative to Sandalwood with some similar notes. It  pairs well with Cedarwood oils and compliments the woody back notes contained within patchouli and Vetivert materials.

It is considered to be an effective and pleasingly efficient insect repellent.

None recorded at the time of writing