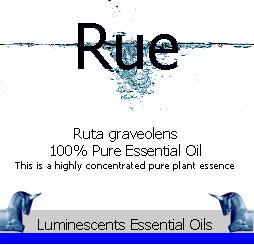 CONSISTENCY: Medium but can solidify at cold temperature

Rue (Ruta graveolens) is a hardy, evergreen, somewhat shrubby plant and a native of Southern Europe. The stem is woody in the lower part, the leaves are alternate, bluish-green, bi- or tripinnate, emit a powerful, disagreeable odour and have an exceedingly bitter, acrid and nauseous taste.

In England it is one of our oldest garden plants, cultivated for its use medicinally, having, together with other herbs, been introduced by the Romans, but it is not found in a wild state except rarely on the hills of Lancashire and Yorkshire. This wild form is even more vehement in smell than the garden Rue. The whole plant has a disagreeable and powerful odour. The first flower that opens has usually ten stamens, the others eight only.

It has no know aromatherapy associations as it can cause quite severe skin irritation however, it has, quite confusingly,  been used for skin irritation in the past and it has been used for haemorrhoids and swollen veins. It was once a recommended remedy as an antidote to poison. Rue was used for nervous afflictions, digestive problems and hysterics in ancient times.

Not be used in aromatherapy as the oil is considered toxic, an abortifacient,  an irritant to the mucus membranes, a neurotoxin, and causes sun sensitivity due to photo-toxicity