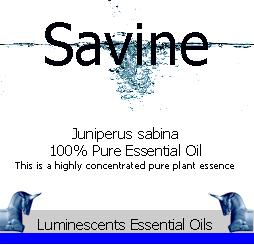 SCENT: Savine essential oil is very resinous and reminiscent of Juniper Berry but alltogether a much coarser odour.

Juniperus sabina from which Savine Essential Oil is distilled is a compact evergreen shrub about 1 metre or 3 feet high. It has a tendency to spread out horizontally, and has dark green leaves and purplish-black berries.

Savine has no Aromatherapy associations due to its extreme toxicity.

Savine is not used so readily today but was once used in ointments, salves or dressings for blisters, rashes, warts and other skin issues in a similar fashion to Wintergreen. It is perfectly safe to use externally in small amount in this manner but very dangerous to ingest as in making an infusion of the herb itself.

There are none documented

Savine is an extreme irritant when administered internally or locally in high density or high concentration; it is a powerful emmenagogue in large doses; it is an energetic poison leading to gastro enteritis collapse and death. It should never be used in pregnancy, as it produces abortion. It is rarely given internally, but was once considered useful as an ointment and as a dressing to blisters in order to promote discharge. The powdered leaves mixed with an equal part of verdigris were once used to destroy warts.