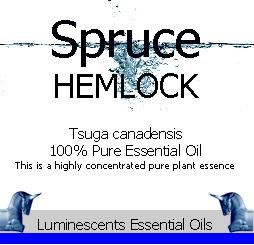 SCENT: Spruce Hemlock essential oil has a pleasant balsamic scent that is sweet with fruity tones.

Spruce Hemlock (Tsuga Wild) is distilled from the leaves and twigs of the conifer tree commonly referred to as a Hemlock. This is a large evergreen tree that grows up to 50 metres tall and is very long lived. It produces small brown cones and has an estimated life span of 1200 years. Spruce Hemlock  essential oil is also very similar to White Spruce, with slight subjective differences.It is often confused with the other Spruce Oils which in themselves are confusing as some of them are Pines!

It is credited with being a spiritual oil  stabilizing while opening.

American Indians heated the twigs in steam baths to induce sweating for relief of rheumatism, colds and coughs. They applied the bark and twigs externally to stop bleeding wounds and sore muscles, and by boiling the Spruce Hemlock twigs and cones in maple syrup, made beer.