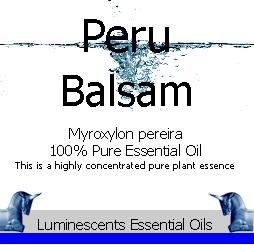 SCENT: Peru Balsam Essential oil has a vanilla like scent and is often used as a scenting agent in creams and lotions.

CONSISTENCY: VERY thick and viscous – warming before use will make it more workable

Peru Balsam is collected from wild trees along the ‘Balsam Coast’ of El Salvador, though many such trees are now available and grown in North America which is where this particular oil has been sourced.

Historically, this was an important ingredient in the anointing oils of the Christian faith. It is quite often used in flavouring food and drink but also in the perfume industry and toiletries for its fragrance which is kind of cinnamon and vanilla like. This is due to its composition containing cinnamic acid and vanillin amongst many other chemical components. It is sometimes used to flavour tobacco but rarely so today but you’d be surprised at what foods and drinks commercially available contain it as an ingredient from cola type drinks to chutneys and chocolates.

The resin from which the essential oil is obtained starts by scorching or inflicting  wounds on the bark of the trunk of the tree  which then produces an oily and aromatic resin (known as a balsam) which the tree uses to heal the wound. It is this liquid which is then steam distilled to produce an essential oil.

CAUTIONS:May cause skin sensitisation in some.