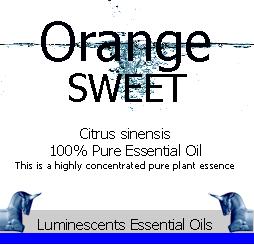 SCENT: Orange Sweet Essential Oil has a sweet, citrus smell much like the orange peels it is derived from, only more intense and concentrated.

Sweet Orange is derived from an evergreen tree. It is smaller than the bitter orange tree, and less hardy with fewer or no spines. The fruit itself has a sweet pulp with no bitter membrane.