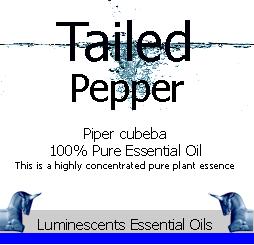 Tailed Pepper is also known as Cubeb Pepper or Java Pepper of the pepper family, is grown in Indonesia, particularly Java, also in The Congo and Sierre Leone in Africa. The berries from the woody vines are used to make the essential oil.

Tailed Pepper is mentioned in alchemical writings by its Arabic name. In his Theatrum Botanicum, John Parkinson tells that the king of Portugal prohibited the sale of cubeb in order to promote the black pepper (Piper nigrum) around 1640. It experienced a brief resurgence in 19th century Europe for medicinal uses, but has practically vanished from the European market since. It continues to be used as a flavouring agent for gins and cigarettes in the West, and as a seasoning for food in Indonesia and Africa.

The Cubeb, by which it is probably more appropriately named, came to Europe via India through the trade with the Arabs. The name Cubeb comes from Arabic kababah which is of unknown origin, by way of Old French quibibes.