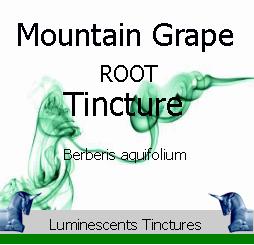 Mountain Grape Root, also known as Oregon Grape Root and seldom nowdays as Holly Leaved Barberry, and from which this Mountain Grape Root Tincture is obtained, is a native plant on the North American west coast from British Columbia to northern California, occurring in the understory of Douglas-fir forests and in brushlands. It is the state flower of Oregon.