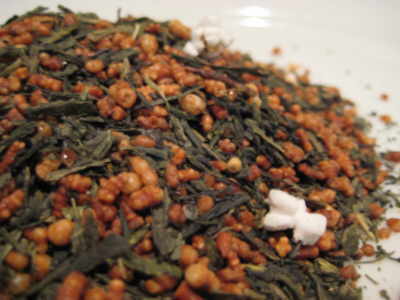 Japan has been producing teas for between 1000 and 1200 years, and all production is devoted to green teas. Some, however, undergo further processing such as roasting and in the case of Genmai Cha, (this tea) additions in the form of rice kernels. They are usually more expensive than teas from China

It is sometimes referred to by locals as popcorn tea because a few grains of the rice will pop during the roasting process and resemble popcorn. Today it is drunk  by everyone in Japan but originally this type of tea was only drunk by poor Japanese, as the rice served as a filler and reduced the price of the tea considerably. This is also why it is known as the people’s tea. The sugar and starch from the rice cause the tea to have a warm, full flavor that is similar to that of nuts. It is considered easy to drink and helps digestion.

Tea steeped from genmaicha is a light yellow in hue. Its flavour is mild and combines the fresh grassy flavour of green tea with the aroma of the roasted rice. Although this tea is based on green tea it is only recommended that you brew this tea for around half a minute.