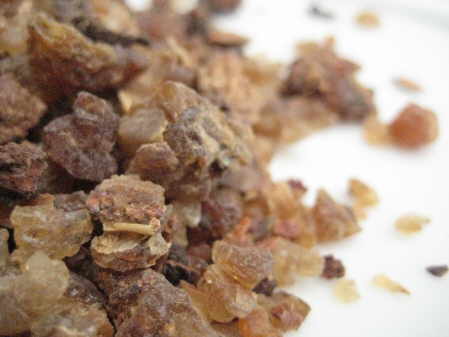 Wild Myrrh trees from which the Myrrh resin is extracted produce a natural gum produced by the tree when it has been wind or animal damaged and the gum seals the wound on the tree gradually hardening into what are known as pearls. The name Myrrh is from the Aramaic.

When a tree wound penetrates through the bark and into the sapwood, the tree bleeds a resin. Myrrh gum, like Frankincense, (to which it is closely related) is such a resin. When people harvest it  they wound the trees repeatedly to bleed them of the gum. Wild Myrrh is taken from tress that only produce it naturally.

Commiphora myrrha is native to parts of Saudi Arabia, Oman, Yemen, Somalia, Eritrea and eastern Ethiopia. Meetiga, the trade-name of Arabian Myrrh, is more brittle and gummy than the Somalian variety and does not have the latter’s white markings.

Myrrh gum is waxy and coagulates quickly. After the harvest, the gum becomes hard and glossy. The gum is yellowish and may be either clear or opaque. It darkens deeply as it ages, and white streaks emerge.

Myrrh resin has been used throughout history as a perfume, incense, and medicine. Myrrh was once mixed with wine and drunk and is still done so to some extent today.

Myrrh is used as an antiseptic in mouthwashes, gargles, and toothpastes. It is reputed to tighten the gums around the teeth.

It is used in liniments and healing salves that may be applied to abrasions and other minor skin ailments as it has a long history of being antiseptic. Myrrh has also been recommended as an analgesic for toothaches and can be used topically for bruises, aches, and sprains.

Myrrh is a common ingredient of tooth powders. Myrrh and borax in tincture can be used as a mouth-wash. A compound tincture, or horse tincture, using myrrh is used in veterinary practice for healing wounds.

Most people associate it nowadays, not with its medicinal attributes, but as an incense.