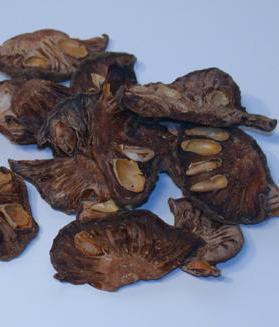 Also known as Mangosteen or Aamsul

The outer cover of the Mangosteen fruit is dried in the sun to get aamsul or kokam. It is used as a slightly sour spice in recipes from Maharashtra. Kokum yields a peculiar flavour and blackish red colour. It is a preferred substitute for tamarind in curries and other dishes from the Konkan region. It is also used in cuisine from Gujarat, and parts of South India where it is frequently used to add flavour and tartness to dal (lentil soup) for flavour balance.

Kokum squash or kokum concentrate is used in preparing a drink (sherbet) which is bright red in colour. Kokum sherbet improves digestion and cools the body during summers.

The extract/ concentrate of this fruit is called aagal in Konkani and Marathi. It is added during the preparation of solkadhi, along with coconut milk.

Mangosteen is also known as the purple mangosteen and is s a tropical evergreen tree with edible fruit native to land bordering the Indian Ocean and teh Caribbean.  Its origin is uncertain due to widespread prehistoric cultivation. It now grows mainly in Southeast Asia, southwest India and other tropical areas such as  Columbia and parts of Florida where the tree has been introduced.

The tree grows from 6 to 25 metres (20 to 82 feet) tall in height and the fruit of the is sweet and tangy, juicy, a bit fibrous, with fluid-filled vesicles, with an inedible, deep reddish-purple colored rind known as an exocarp.  In each fruit, the fragrant edible flesh that surrounds each seed is botanically  the endocarp  i.e., the inner layer of the seeds which are both almond-shaped and sized.