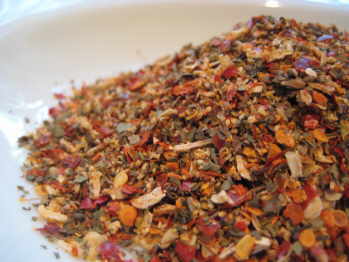 175,000 Scoville Heat Units and as a consequence this seasoning is considered “HOT”

This seasoning is principally made up of the Piri Piri chilli, sometimes spelt Peri Peri and alternatively known as African Devil,  African Birds Eye Chilli or African Red Devil

It is a cultivar of the chili pepper that grows both wild and domesticated. It is a small and extremely spicy member of the capsicum plant genus.

Piri Piri seasoning (used sometimes as a marinade) is Portuguese in origin and very popular and prevalent in Angola, Namibia, Mozambique and South Africa.

It is made from the crushed chillies, citrus peel, dessicated onion, black pepper, salt, bay leaves, paprika and pimiento with basil, oregano and a touch of tarragon.

The chilli plants are usually very bushy and grow in height to 45-120 centimeters, with leaves of 4-7 cm length and 1.3-1.5 cm width. The fruits are generally tapered to a blunt point and measure up to 2.5 centimeters long. Immature pod color is green, mature color is bright red or purple. Some varieties of of this chilli measure up to a staggering 175,000 Scoville Heat Units and as a consequence this seasoning is considered “HOT”

Piri Piri is the Swahili word for pepper pepper