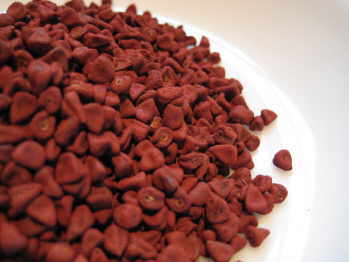 Annatto (Bixa orellana) sometimes called Achiote, Urucum, Colorau, Bija  or Roucou, is a derivative of the achiote trees of tropical regions of the Americas, used to produce a red food colouring and also as a flavouring. Its scent is described as “slightly peppery with a hint of nutmeg” and flavour as “slightly sweet and peppery”.

Annatto is produced from the reddish pulp which surrounds the seed of the achiote. It is used as a natural colouring agent in many cheeses ( Cheddar, Red Leicester, and Brie), margarine, butter, rice, smoked fish and custard powder.

It is commonly found in Latin America and Caribbean cuisines as both a colouring agent and for flavouring. Central and South American Natives used the seeds to make a body paint, and lipstick. For this reason, the achiote is sometimes called the lipstick-tree.

In Venezuela, It (called locally ‘onoto’) is used in the preparation of hallacas, perico, and other traditional dishes.

In Brazil, both the seed (the product) and the tree (Bixa orellana) are called Urucum and the product itself is also called Colorau.

In Cuba and other Caribbean islands, both fruit and tree are popularly called Bija (pronounced bee-ha) instead of Bixa.

It is a major ingredient in the popular spice blend Sazón.

With a spice grinder (or coffee grinder), grind the achiote seeds, cumin seeds, peppercorns, allspice berries and cloves to a fine powder. You can also do this in a blender providing you also add the wet ingredients but be aware that allspice berries are as hard as anything and will make a real mess of your blender blades so if using a blender you might want to try allspice powder, altogether inferior in my book, but a sacrifice worth making for the sake of not destroying your blender!

This is a traditional paste that originated in the Yucatán region of Mexico. It is used in stews or as a rub for meats. Try rubbing the paste on pork, chicken, fish or seafood before grilling for a warm, spicy flavour.