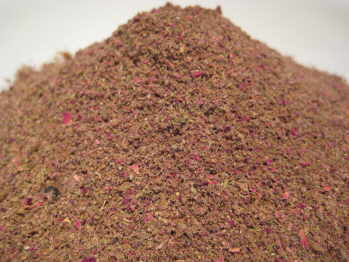 This is an intensely aromatic spice mix from Afghanistan and the North West Frontier province of Pakistan We don’t think that the recipe originates from that region but is more probably a mughal derived spice mix from the time when Lahore and Agra were the Mughal capitals of the region.

It has a sweet rose scent which is warm and very spicy and with very evident peppery notes. There is no chilli in the spice mix the heat is from the pepper and other ingredients but on the whole it is a spicy, floral mix rather than one with heat.

It is excellent for subtly spiced, aromatic poultry dishes. also goes well in marinades and as a meat rub.

Finely chop the onion and sweat over a low heat in some olive oil until they loosen and become translucent. Do not burn them as they will become bitter. The aim is to have a loose golden chutney consistency. add a tablesppon of water or so if the sweating of the onions is making them too dry and browning them too much.

Blend the chopped garlic, the finely diced fresh chilli and the finely chopped fresh ginger and add to the onions with the Rose Petal Masala mix. Allow the spices to fry slowly and cook out – the aroma will now be very evident. Add the diced chicken and the two tins of chopped tomatoes plus the same quantity of water as fills the two empty cans of tomatoes. Now simmer for an hour to one hour and half – the whole will turn a beautiful colour and the liquid will have reduced considerably leaving a thick consistency to the sauce.

Add the coconut cream and the cinnamon quill and simmer for a further 10 to 15minutes.

Serve either on a bed of rice or with roti and garnish with freshly chopped coriander.