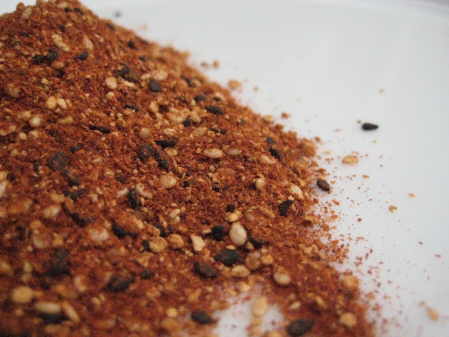 Prepared in an environment where nuts and grains may have been present.

Shichimi Tōgarashi Spice Blend is also known as Nana-iro Tōgarashi Spice and Japanese Seven Spice and is a sumptuous and very famous Japanese classic blend of spices and ingredients employed to season all sorts of Japanese soups, noodles and rice dishes and to flavour tofu and rice crackers.

It was originally made as a herbal medicine rather than a culinary condiment. In Japanese, Tōgarashi means Chilli and Shichi means seven.

It is a versatile condiment which can be used in any number of ways but is invaluable to sprinkle over noodles or to include in a tempura batter or over any grilled meats or fish. It adds character and interest to all manner of steamed vegetables or just simply in a bowl of plain boiled rice. We actually like it on plain toast – just a sprinkling. It adds a great deal of flavour to shabu shabu which is comprised of small segments of meat, fish and/or vegetables all cooked in a very rich broth.

It can be dated back to at least the 17th Century when it was introduced by spice traders in Edo which is the current day capital, Tokyo. It is very rarely but still called Yagenbori  which is the name of the district in which it was originally produced.