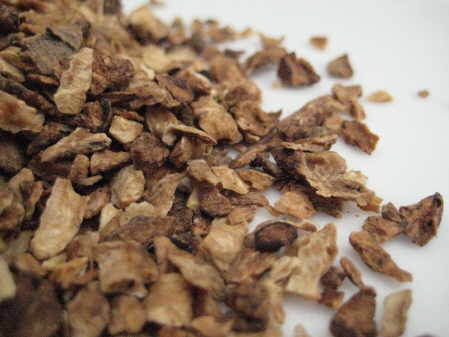 Chicory is a member of the Asteracea which also includes Artichokes, Calendula, Dandelions, Burdock and Jerusalem Artichokes. It belongs to the genus Cichorium.

There are a large number of plants found in this genus. They include Belgian endive, culinary endive, escarole, and radicchio. Each of these plants differs considerably in appearance, colour and to some extent, flavour, although they all share a slightly bitter taste.

Most of the members of this family produce a root that can be roasted, ground and combined with other roots to make a coffee substitute. Today, many people combine roasted chicory root with roasted dandelion root to make the coffee-like beverage. Unlike coffee, however, Chicory, by itself actually has a sedative action on the central nervous system.

Chicory is mostly taken as a tea, however, as Inulin, its most prized constituent, is not damaged by and is ONLY soluble in, hot water whereas the Inulin is damaged by the roasting of the root to make coffee.

The ancient Egyptians ate large amounts of chicory because it was believed that the plant could purify the blood and liver. This purifying effect is probably why it has been used beneficially with people who have arthritis, rheumatism and gout.

Women who suffer from premenstrual syndrome (PMS) may find that regular use of Chicory Root as a bitter and a liver tonic may assist in maintaining hormone balance and lessening the symptoms of PMS. In addition, altering the diet by eating a “bitter” salad that includes fresh dandelion, chicory, and sorrel is believed to strengthen the liver and discourage the growth of candida.

Chicory Root has the effects of lowering cholesterol, reducing the pulse rate, and aiding in stomach and liver complaints. It is believed to increase the flow of bile. Among other internal uses are those for sore throat, hemorrhoids, tuberculosis, abdominal cramps, melancholy, deafness and rashes.

Chicory supports the body’s ability to absorb calcium, a nutrient that helps build and maintain strong teeth and bones.

“Inulin is recommended sometimes for diabetics; it has a mildly sweet taste, and is filling like starchy foods, but because it is not absorbed, it does not affect blood sugar levels.

In addition to enhancing digestive processes, chicory helps to keep the liver healthy. The inclusion of chicory root supplements in the diet supports the proper metabolism of cholesterol.

To Make a Chicory Root Tea:-

Lightly simmer 2 teaspoons of the root for about 20 minutes ( as with all root and bark teas, the infusion needs longer than with leaf or flower teas)