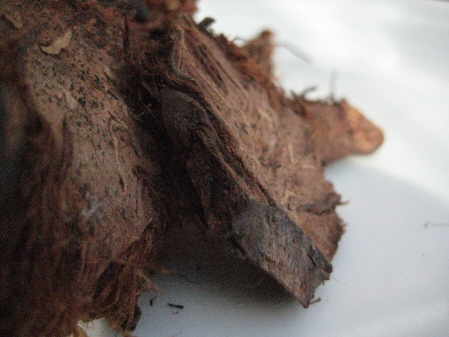 Guan Zhong (Dryopteris crassirhizoma) is also known as Wood Fern is a common woodland plant that can be seen growing in many habitats. It is such a familiar garden ornamental plant that people seldom associate it with medicinal substances.

It is one of the 6 species used medicinally and primarily produced in the mountainous area of Heilongjiang, Jilin and Liaoning provinces. It is regularly harvested in winter. And then washed clean, petioles and fibrous roots removed, sun dried and sliced. Fresh, it can be used as a stir fry ingredient. Medicinally it is usually used in this dried form.

Clinically it does come with very good therapeutic effect on a variety of diseases, such as viral influenza, fever, headache, intestinal worms, and so on. It has hemostatic, analgesic, anti-inflammatory effect when used externally. Just because of this, the U.S. Pharmacopoeia accepted it as an anthelmintic. It should be noted that Dryopteris is the one and only fern listed there.