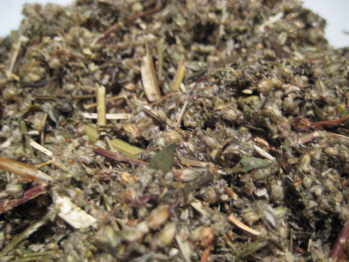 Also known as Wormwood, Felon Herb, Chrysanthemum Weed, Wild Wormwood, or St. John’s Plant (not to be confused with St John’s wort). It is called Mogusa or Yomogi in Japan.

Mugwort Herb (Artemisia vulgaris) is native to temperate Europe, Asia and northern Africa, but is also present in North America where it is an invasive weed. It is a very common plant growing on nitrogenous soils, like weedy and uncultivated areas, such as waste places and roadsides.

Mugwort Herb is a different species from Wormwood, but of the same genus, and containing some of the same chemical components. The Mugwort is closely allied to the Common Wormwood (Artemisia absinthium), but may be readily distinguished by the leaves being white on the under-surfaces only and by the leaf segments being pointed, not blunt. It lacks some of the essential oils of the Wormwood.

The leaves and buds, best picked shortly before the plant flowers in July to September, were used as a bitter flavouring agent to season fatty meat and fish. In Germany, known as Beifuß, it is mainly used to season goose, especially the roast goose traditionally eaten for Christmas.

Mugwort is also used in Korea and Japan to give festive rice cakes a greenish color. After the cherry trees bloom in Korea, people collect wild mugwort. It is a common seasoning in Korean soups and pancakes. Known as a blood cleanser, it is believed to have different medicinal properties depending on the region it is collected.

In the Middle Ages Mugwort was used as part of a herbal mixture called gruit, used in the flavouring of beer before the widespread introduction of hops.

The plant contains ethereal oils (such as cineole, or wormwood oil, and thujone), flavonoids, triterpenes, and coumarin derivatives. Chewing some leaves will alleviate fatigue and stimulate the nervous system. It was also used as an anthelminthic, so it is sometimes confused with wormwood (Artemisia absinthium).

Mugwort is used in the practice of traditional Chinese medicine in a pulverized and aged form called moxa. Since it causes uterine contractions, it has been used to cause abortion. It also plays a role in Asian traditional medicine as a method of correcting breech presentation. This method is termed moxibustion.

Much used in witchcraft, Mugwort is said to be useful in inducing lucid dreaming and astral travel. Consumption of the plant, or a tincture thereof, prior to sleeping is said to increase the intensity of dreams, the level of control, and to aid in the recall of dreams upon waking. One common method of ingestion is to smoke the plant. Colloquially, this practice is known as “Having a tasp.”