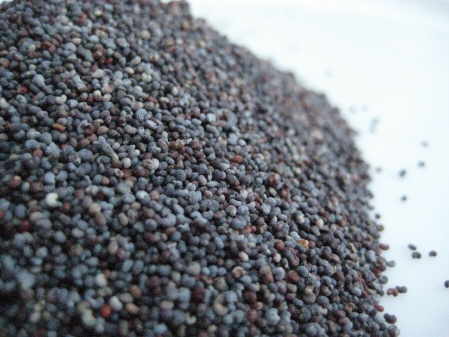 Blue Poppy Seed is the dried, kidney-shaped seed of the annual Papaver somniferum. The seeds are very small in size, slate blue in colour (European) or white (Asian) and are nut-like in flavour.

Best of all is Poppy produced from the Netherlands but they are also produced in Australia, Romania and Turkey. The Dutch variety, noted for its uniform slate blue colour, is recognised as the best quality blue poppy seed but there is very little difference in flavour between the blue and white poppy seed types and it is rather a question of aesthetics in their choice.

Poppy seed has been cultivated for over 3,000 years. The tiny poppy seed actually comes from the plant that produces opium. The botanical name for the poppy flower (somniferum) means “sleep bearing.” The seed itself does not have this effect. Poppy seed was used as a condiment as early as the first century A.D. The red poppy flower has been the symbol of fallen warriors throughout history.  It was thought of by the Romans to be a symbol of sleep and death and was adopted by some countries as the emblem to commemorate Armistice after the Great War.