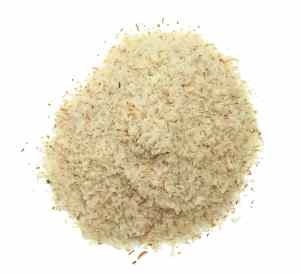 Psyllium is the common name used for several members of the plant genus Plantago whose seeds are used commercially for the production of mucilage.

Psyllium is produced mainly for its mucilage content, which is highest in P. ovata. Mucilage describes a group of clear, colorless, gelling agents derived from plants. The mucilage obtained from psyllium comes from the seed coat. Mucilage is obtained by mechanical milling/grinding of the outer layer of the seed. Mucilage yield amounts to approximately 25% or more (by weight) of the total seed yield. Plantago seed mucilage is often referred to as husk or psyllium husk. The milled seed mucilage is a white fibrous material that is hydrophilic (literally, water-loving – it is a polar substance). Upon absorbing water the clear colorless mucilaginous gel that forms increases in volume by ten-fold or more. Psyllium is mainly used as a dietary fibre, which is not absorbed by the small intestine. The purely mechanical action of psyllium mucilage absorbs excess water while stimulating normal bowel elimination. Although its main use has been as a laxative, it is more appropriately termed a true dietary fibre.

The United States is the world’s largest importer of psyllium “husk” with over 60% of total imports going to pharmaceutical firms for use in products such as “Metamucil”, “Effersyllium” and “Fiberall”. Psyllium mucilage is also used as a natural dietary fibre for animals. The dehusked seed that remains after the seed coat is milled off is rich in starch and fatty acids and is used in India as chicken feed and as cattle feed.

Technical grade psyllium has been used as a hydrocolloidal agent to improve water retention for newly seeded grass areas and to improve transplanting success with woody plants.v