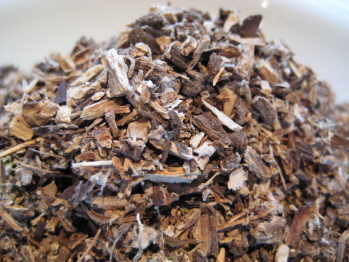 Burdock Root which is known by many names such as Hardock, Hareburr, Turkey Burrseed, Great Burr, Cocklebur, Beggars Buttons, Cockle Buttons, Lappa, Bardane, Thorny Burr, Fox’s Clote, Love Leaves, Personata, Clotbur, Happy Major is well known for its cosmetic uses and lesser known as a medicinal herb nowdays – It was not always so…..

Burdock Root contains flavonoids and many antibacterial substances such as arctiol, fukinone and taraxasterol and are mildly laxative, mildly diuretic, and depurative in that order.

Burdock Root is particularly susceptible to a harmless to human grub and a fungus. Given that we have not experienced any really cold winters for some years which would normally kill them off the result is that the entire European crop is liable to show some grub or fungal activity. This is usually evident when the storage conditions are just right to activate the fungus or hatch the grubs which is why we say on the label not to store in a kitchen ( which has unavoidable temperature variants) and to do so in a sterilised jar at  a constant low temperature.

Our stock is kept refrigerated

This product is certified organic and not irradiated, in any way so it may show signs of grub or fungal damage if not kept at a constant low temperature and in a sterilised container.

We are reluctant to abandon our principles and sell only Burdock Root which has been irradiated or treated with pesticide but we may well be forced to stop supplying the product completely if instructions for storage are ignored.

Burdock Root in powdered form can be found here