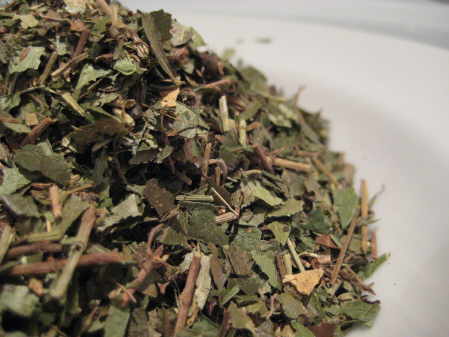 Vinca Major & Vinca Minor appear to be quite similar as far as reported qualities, but – can also be poisonous if used in excess or inappropriately.

It is important that you seek professional advice before attempting to treat yourself with this herb if intending to take internally.

Periwinkles are members of the Dogbane family, many members of which are VERY poisonous when ingested. Therefore, if you are going to try internal concoctions made at home, do it with extreme caution and in extreme moderation. Don’t try this herb when pregnant or if you have kidney, liver, or lung disease. and once again We urge you to seek professional advice first.

Lesser Periwinkle Herb (Vinca minor in this case) is also sometimes called lesser periwinkle, common periwinkle, small periwinkle, Creeping Myrtle  or dwarf periwinkle and is a native to Central and Southern Europe but is now cultivated in almost all temperate climates around the world.

The colour named Periwinkle is named after the flower’s startling blue hue but there are also pink versions abundantly available.

It is generally used to increase oxygen and blood flow to improve cognitive function and is also used to alleviate depression, the irritation of tinnitus and minor problems associated with menopausal symptoms. It is an astringent herb with a bitter or acrid taste.

Externally, and without the toxic implications of internal use, an infused oil or ointment can be made from the herb and applied directly for dermatitis, eczema, acne, bleeding gums, nosebleeds, mouth ulcers, and bleeding haemorrhoids.

Vinca minor contains more than 50 different alkaloids and vincamine is the molecule responsble for the plant’s nootropic acivity.

The name Vinca is derived from the latin ‘vincire’,  meaning to bind about or fetter  based on its trailing habit.

Both Vinca Minor and Vinca Major are thought, by some, to be poisonous however this isn’t true. They belong to the Dogbane family which is toxic and Vinca Major is often confused with Madagascan Periwinkle ( Catharanthus rosea formerly Vinca rosea ) which does contain alkaloids used in chemotherapy. It is important that should you wish to use this herb, however, you do so under proper medical supervision or consult a professional herbalist