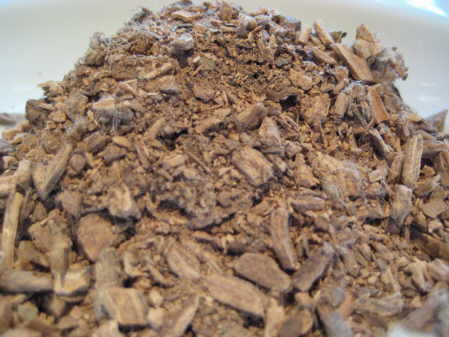 Wild Condurango Bark (Gonolobus condurango) is the bark of a South American vine of the milkweed family grown principally in Peru, Ecuador and Colombia. It is a high elevation plant growing best on the lower slopes (2k to 3k metres) of the Andes. It has heart shaped leaves and rather unattractive greenish to brownish trumpet flowers.

It is a very bitter stimulant so when taken internally it serves to increase digestive juice production. As such it is often used to reduce vomiting and the nausea that accompanies it. It calms a fluttery stomach so can be used in cases of travel sickness nd considerably eases rather more uncomfortable stomach cramps. It increases (like most btters) bile production by the liver.

It is most commonly taken for stomach ailments

Condurango was first introduced into the United States in 1871 from Ecuador and it became a trusted remedy for digestive disorders in the late 1800s and early 1900s when it was included in the U.S. Pharmacopeia as well as several other European pharmacopeias.

It is considered an analgesic, appetite stimulant, carminative, hemostat, stomachic, tonic and emmenegogue