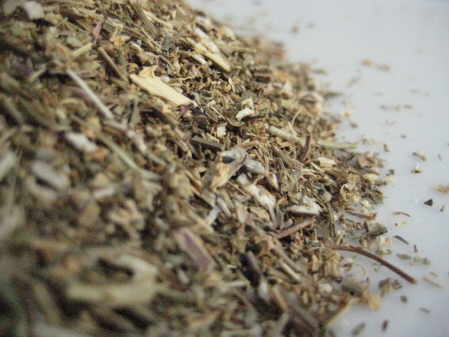 Feverfew (Tanacetum parthenium) sometimes called  Bachelor’s Buttons or Featherfew is a traditional medicinal herb which is found in many old gardens, and is also occasionally grown for ornament. The plant grows into a small bush up to around 18 inches high, with citrus-scented leaves and is covered by flowers reminiscent of daisies. It spreads rapidly and is quite invasive. They will cover a wide area after a few years. It is also commonly seen in the literature by its synonyms, Chrysanthemum parthenium (L.) Bernh. and Pyrethrum parthenium (L.)

Feverfew has been used for reducing fever and for treating headaches, arthritis and digestive problems. Modern work has supported the use of feverfew as a treatment for migraine headaches. By inhibiting the release of serotonin and prostaglandins, both of which are believed to aid the onset of migraines, Feverfew limits the inflammation of blood vessels in the head. This stops the blood vessel spasm many believe contribute to headaches.

The active ingredients in the plant include parthenolide and tanetin, both of which offer relief from migraine. Capsules or tablets of feverfew generally contain at least 205 mcg, parthenolide; however, it might take four to six weeks before they become effective, and feverfew is not a remedy for acute migraine attacks.