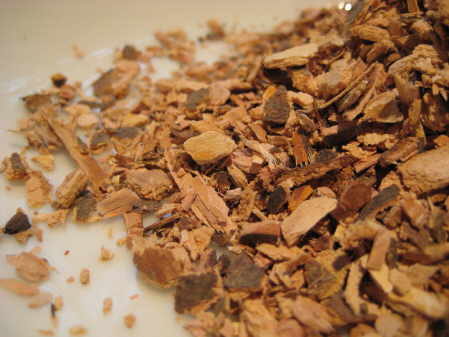 Black Haw Bark (Viburnum prunifolium) known as Sweet Haw, or Stag Bush is a species of Viburnum native to southeastern North America, from Connecticut west to eastern Kansas, and south to Alabama and Texas.

For centuries, Black Haw Bark has been used for medical purposes, mainly for gynaecological conditions. The bark is the part of the plant used in treatments.

The active components include scopoletin, aesculetin, salicin, 1-methyl-2,3 clibutyl hemimellitate, and viburnin. Tannin is another chemical component of black haw.

Native Americans used a decoction of Black Haw Bark to treat gynaecological conditions, including menstrual cramps, aiding recovery after childbirth, and in treating the effects of menopause. As a folk remedy, black haw has been used to treat menstrual pain, and morning sickness. Due to its antispasmodic properties, the plant may also be of use in treating cramps of the digestive tract or the bile ducts.

The primary use of black haw today is to prevent menstrual cramps. The salicin in black haw may also be of use in pain relief.

Black Haw’s primary use was to prevent miscarriages. American slaveholders also used the plant to prevent abortions. Slaves were a valuable asset, and their owner also owned their offspring, so ensuring that female slaves gave birth was of paramount importance. In defiance, some slave women would attempt to use cotton seeds to cause a miscarriage. The slaveowners would therefore force pregnant slaves to drink an infusion of black haw to prevent that.