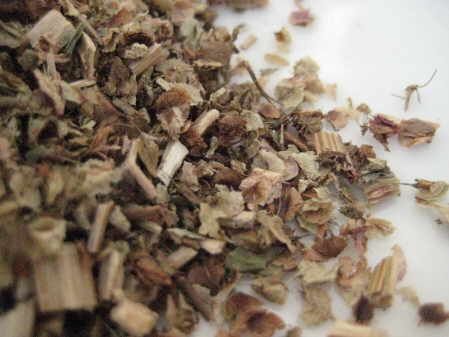 Garden Sorrel (Rumex acetosa) not to be confused with Sheep’s Sorrel which is Rumex acetosella, is a perennial weed but hard to find and correspondingly expensive, particularly at certain times of the year when it cannot be harvested – you will find it difficult to obtain. It is also known as Common Sorrel or just Sorrel, Spinach dock and Narrow-Leaved Dock. It is a common plant in grassland habitats and is cultivated as a garden herb or leaf vegetable.

Garden Sorrel has been cultivated for centuries. The leaves may be puréed in soups and sauces or added to salads; they have a flavour that is similar to kiwifruit or sour wild strawberries. The plant’s sharp taste is due to oxalic acid, which is mildly toxic.

In Romania, the herb is known as măcriş or ştevie, and is used to make sour soups, stewed with spinach, added fresh to lettuce and spinach in salads or over open sandwiches.

In Russia and Ukraine it is called shchavel and is used to make soup called green borscht. It is used as a soup ingredient in other countries, too.

In Hungary the plant and its leaves are known as sóska . In Turkey it is called kuzukulağı meaningthe lamb’s ear. In Polish it is called szczaw.

In Croatia and Bulgaria is used for soups or with mashed potatoes, or as part of a traditional dish containing eel and other green herbs.

In rural Greece it is used with spinach, leeks, and chard in spanakopita.

In the Flemish part of Belgium it is called zurkel and preserved pureed sorrel is mixed with mashed potatoes and eaten with sausages, meatballs or fried bacon, as a traditional winter dish.

In Vietnam it is called Rau Chua and is added fresh to lettuce and in salads for Bánh Xèo.

In Portugal, it is called azeda or azeda-brava meaning “sour”or “fiercly sour” and is usually eaten raw in salads or used to make soups. This is identical to its use in Brazil, under the name of azedinha

In Albania it is called lëpjeta, the leaves are simmered and served cold marinated in olive oil, it is used in soups, and even as an ingredient for filling byrek pies.