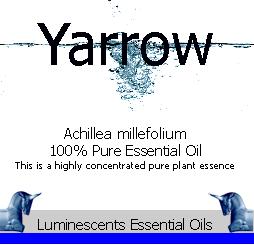 Yarrow Essential Oil is extracted from a perennial herb (Achillea millefolium) with a simple stem that can grow up to one metre in height. It is a native to temperate regions of the Northern Hemisphere in Europe, North America and Asia.  It has fern-like feathery leaves and bears numerous pink-white, dense flower heads. Yarrow is also known as Milfoil. This is a reference to its feathery appearance and Common Yarrow.

Yarrow is credited with having an energy similar to that of the earth. This may seem extreme to some, but most aromatherapists agree that it is a balancing, uplifting oil with practical applications for wounds and open sores. It is also used in cosmetics for dry skin care. It is a nourishing oil.

Yarrow has a long history as a medicinal herb, which according to legend goes back to Achilles, who used it to heal wounds inflicted by the sword during the wars with Troy.

Can cause skin sensitivity on some people.