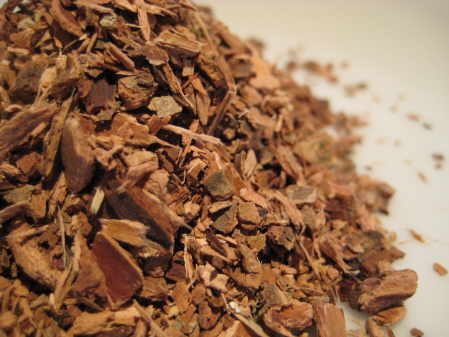 With internal use, witchhazel may cause stomach irritation and cramping. In particular, it should not be taken internally in combination with medications, supplements or herbs containing alkaloids, as the tannins in witchhazel may interfere with absorption.

Witchhazel Bark contains tannins and volatile oils, one group of which is named hamamelitannins, which are the main active constituents of the plant. These constituents contribute to the strong astringent effect of witchhazel. Pharmacological studies have suggested that due to this astrngency, witchhazel strengthens veins and is anti-inflammatory.

Topical creams made from witchhazel bark are currently used widely in Europe to treat inflammatory skin conditions, such as eczema. One double-blind trial found that a topical witchhazel ointment (applied four times per day) was as effective as the topical anti-inflammatory drug bufexamac for people with eczema.

A ptisane or infusion of witchhazel can be made by steeping two or three teaspoonfuls of the leaves or bark in 100 ml of boiled water for 10 to 15 minutes. The infusion can be taken two to three times daily between meals.

In combination with warm, moist compresses, witchhazel extracts can be applied liberally, at least twice each day, (in the morning and at bedtime) on haemorrhoids. For other skin problems, ointment or cream can be applied three or four times a day, or as needed.

Native Americans produced witchhazel extract by boiling the stems of the shrub and producing an infusion or decoction, if you will, which was used to treat swellings and inflammations

The earliest Puritans who setted in New England readily accepted and adopted this remedy from the natives, and its use became widely established in the United States as colonial ambitions grew.

The forked twigs of witchhazel are preferred as divining rods