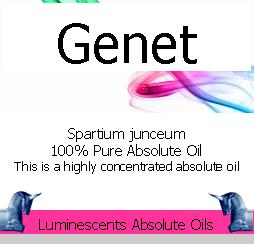 SCENT:  It has intensely sweet, floral hay like aroma.

Spartium Junceum or Spanish Broom from which Genet Absolute Oil is obtained by solvent extraction from the flowers of the plant belongs to the group of evergreen, semi-evergreen, and deciduous shrubs of the legume family fabaceae. It is also sometimes called Weavers Broom.

It is a native of Western Europe and principally grows in Italy, France and Spain where the climate suits. It is alsoquite well established and known in NW Africa and SE Asia. In South America where it has been introduced, it is known as Retama and is a common ornamental plant used in municipal schemes.

It has been widely introduced into other areas, and is regarded as a noxious invasive species in places with a Mediterranean climate such as California and Oregon, Hawaii, central Chile, southeastern Australia, the Western Cape in South Africa and the Canary Islands and Azores. It was first introduced to California as an ornamental plant.

The Absolute Oil works well in disinfecting the body and is considered a good balancer and cleanser. The main chemical constituents Genistein, Sarothamnin, Sparteine, & Oxytyramine.

It is considered by aromatherapists, to be an antidepressant, disinfectant, and a carminative. It is used as a flavouring and a dye.