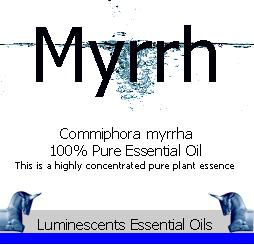 CONSISTENCY: Medium to thick as it ages

Wild Myrrh, though classified as shrubs, can grow up to 10 Metres in height. The trunk exudes a natural oleoresin that hardens into what is classified as reddish brown Tears. Native collectors make incisions into the trees in order to increase the yield which also, sadly, lessens the quality. Wild Myrrh is only taken from trees that produce the resin naturally. It is sometimes known as Opopanax although that is a different species of Myrrh (there are several)

Wild Myrrh is thought to enhance spirituality. Aromatherapists use it as an aid in meditation or before healing. Its actions are characterized as the following:-

Myrrh has been used for centuries as an ingredient in incense, perfumes, and for embalming and fumigations in Ancient Egypt. In folk tradition it was used for muscular pains and in rheumatic plasters. Called mo yao in China, it has been used since at least 600B.C. primarily as a wound herb and blood stimulant. Gerard said of Myrrh’ the marvelous effects that it worked in new and green wounds were here too long to set down…’ Myrrh oil, distilled from the resin, has been used since ancient Greek times to heal wounds.

CAUTIONS: Myrrh can be possibly toxic in high concentrations,