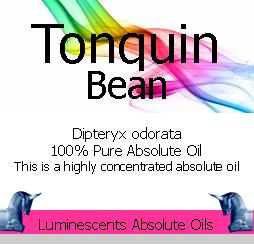 OTHERWISE KNOWN AS: Cumaru or Kumaru or Tonka

SCENT: Tonquin is a beautifully rounded and highly sought product, the aroma from which is peppery, spicy, with vanilla and marzipan note used as a base note in perfume.

Tonquin Bean is sometimes known as Cumaru or Kumaru and is a species of profligate flowering tree belonging to the pea family. It is from this name that its chief constituent Coumarin owes its origin.

The plant is a native to to Central America and the northern South American continent and its seeds are commonly known as Tonka beans, but they are, infact, a seed.

They are dark brown to black, wrinkly when dried and have a smooth, brown interior. Their fragrance brings to mind that of vanilla, almonds, cinnamon, and cloves.

Tonquin beans have been used as a substitute for vanilla, more so as a perfume ingredient, and in tobacco before being banned in some countries. They are used in some French cuisine.

The main producers of the seeds are Venezuela and Nigeria.

Its use in food is banned in the United States by the Food and Drug Administration. Many anticoagulant prescription drugs, such as warfarin, are based on 4-hydroxycoumarin, a chemical derivative of coumarin initially isolated from this bean. Coumarin itself, however, does not have anticoagulant properties.

It is thought that the beans produce Coumarin as a defense mechanism which botanist now attribute to the tree’s long life although with the assistance of radio carbon dating, it is now known that the trees can live as long as 1000 years whereas it was previously thought that Rainforest conditions were the reason for such longevity.

CAUTIONS:Tonquin absolute should be avoided during pregnancy or if subject to seizures.