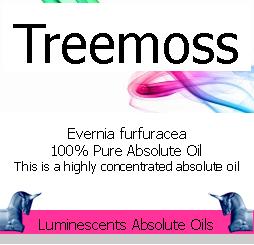 SCENT: Treemoss has a distinct and complex odour and can be described as woody, sharp and slightly sweet. It is the lichen growing on pines and firs and has a pronounced turpentine odour that is valued in certain perfume compositions and differs from Oakmoss in this respect.

Evernia Furfuracea or Treemoss, less common and not to be confused with Oakmoss, is obtained from the lichens that grow on Pine and Fir trees rather than its cousin, the lichen that grows on mature Oak.

It grows in mountainous areas throughout much of the Northern Hemisphere. The pale greenish gray thallus, 3 to 8 cm (1.2 to 3 inches) long, is palmately branched, ending in pointed tips. The upper surface is green and warty with pale gray reproductive bodies (soredia). The undersurface is whitish with a faint netlike pattern. This less common species (E. furfuracea), has similar properties to Oakmoss and is often included under the same common name, which is a translation of the French Mousse de Chêne.

Primarily used for perfumes and incense, this absolute oil is favoured for use in men’s products such as colognes and after shave.

It is commercially harvested in countries of South-Central Europe and usually exported to the Grasse region of France where its fragrant compounds are extracted as Treemoss absolutes and extracts. These raw materials are often used as perfume fixatives and form the base notes of many fragrances. They are also key components of Fougère and Chypre class perfumes.

Treemoss was used in perfumery as early as the 16th century. Baskets filled with it have been found in the ancient royal tombs of Egypt, but whether it was intended for perfume or for food is not known.