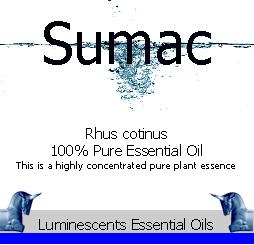 SCENT: Sumac has a surprisingly fresh, balsamic scent with fruity notes and tones that tend to linger.

CONSISTENCY: Medium Viscosity, but may turn thick and even gel-like if exposed to the air for a long period time.

The Rhus from which Sumac Essential Oil is distilled,  is one of several related plants that are more or less common ornamentals both in Europe and in Northern America.  Sumac – is an old world shrub having large plumes of yellowish or reddish feathery flowers resembling puffs of smoke. The leaf arrangement is quite congested.

Sumac is viewed by aromatherapists as an astringent and it is used in the perfume industry for its lingering notes.

In aromatherapy Sumac oil is not commonly blended with other oils.

The wood of Sumac was used as a dye in Greece to impart a beautiful yellow tone to woollen fabrics, while in Italy, the entire plant was used, because of its astringency, for tanning leather.

As with all essential oils, they should not be used during pregnancy and never ingested (taken internally) and should be kept away from children and pets. No medicinal claims are made for this product and the notes above are provided for guidance purposes only. Essential Oils are powerful plant extracts and should be used with extreme caution. You should seek the advice of a qualified practitioner should you be in any doubt.