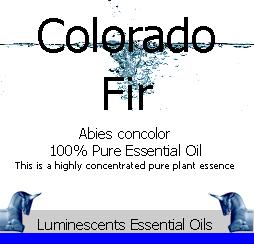 Abies concolor , from which Colorado Fir essential oil is distilled is sometimes known as White Fir, Concolor Fir or Colorado White-Fir and is native to the mountains of western North America, growing at elevations of 900–3,400 metres.

It is a medium to large evergreen coniferous tree growing to 25–60 metres in height and with a trunk diameter of up to 2 metres. It is popular as an ornamental landscaping tree and as a Christmas tree.

It is very closely related to the Grand Fir

The leaves are needle-like and rather flattened, and are  thick, green to glaucous blue-green above, and with two glaucous blue-white bands of stomatal bloom below, and slightly notched to bluntly pointed at the tip. The leaf arrangement is spiral on the shoot, but with each leaf variably twisted at the base so they all lie in either two more-or-less flat ranks on either side of the shoot, or upswept across the top of the shoot but not below the shoot.

The cones are 6–12 cm  broad, green or purple ripening pale brown, with about 100–150 scales; the scale bracts are short, and hidden in the closed cone. The winged seeds are released when the cones disintegrate at maturity about 6 months after pollination.