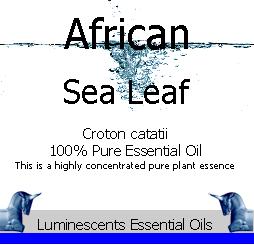 SKU: N/A. Categories: All Oils Beginning with A, Essential Oils.

Croton Catatii from which African Sea Leaf Essential Oil is distilled is a native of Madagascar belonging to the Euphorbiaceae family and a very rare and hard to find oil of interest to and for enthusiasts primarily.

The family of plants is enormous in range and most have been used at some point in human history, particularly In Africa and points East as medicinal plants, many of which are purgatives and go by more familiar names.

Generally used in the West in perfume where it imparts a unique green and crisp character with pronounced warming and resinous notes. There is no record of any aromatherapy use and we have yet to find any evidence of heritage use in the Malagasy or East African culture.

Most Crotons, but by no means all, are an irritant and have some toxicity issues. They are considered an inflammatory, the exact opposite of an anti inflammatory in that when applied to the skin they can cause some inflammation and some irritation. However the oil from this Croton has no recorded side effects, dermal, inhalation or ingestion toxicity issues.

In perfume it is used in tiny quantities and by itself has a very pleasant resinous and herbaceaous aroma but a very acrid taste. It is an oil for enthusiasts and professionals and we would advise amateurs or home perfume makers not to use it without having been trained themselves or consulting a qualified practitioner