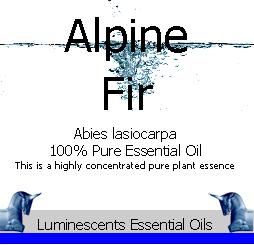 Abies lasiocarpa, from which Alpine Fir essential oil is distilled is sometimes known as Sub Alpine Fir or Rocky Mountain Fir and is native to the mountains of Yukon, British Columbia and western Alberta in Western Canada; and to southeastern Alaska, Washington, Oregon, Idaho, western Montana, Wyoming, Utah, Colorado, New Mexico, Arizona, northeastern Nevada, and the Trinity Alps of the Klamath Mountains in northwestern California in the Western United States.

It is a medium-sized tree growing to 20 metres and occasionally up to 50 metres tall, with a trunk up to 1 metre  across, and a very narrow cone crown.

The bark on young trees is smooth, grey, and with resin blisters, becoming rough and fissured or scaly or old trees. The leaves are flat and needle-like, 1.5–3 cm,  long, glaucous green above with a broad stripe of stomata, and two blue-white stomatal bands below; the fresh leaf scars are reddish. They are arranged spirally on the shoot, but with the leaf bases twisted to be arranged to the sides of and above the shoot, with few or none below the shoot.