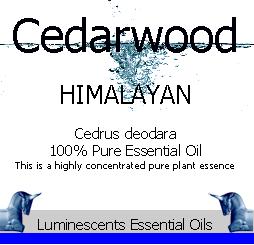 SCENT: Cedarwood Himalayan essentisal oil has a dry – woody aroma, slightly camphoraceous, smoky, balsamic. Very subtle with a hint of spice. By far the best and most subtle aromas of all the Cedarwoods in this editor’s opinion.

Cedarwood Himalayan is a tall, evergreen tree up to 50 metres high, occasionally more. It grows extensively on the slopes of the Himalayas in northern India, Pakistan, Sikkim and Afghanistan and therefore as a high altitude Cedar it’s properties differ from the perhaps better known Atlas Cedar and American Cedars. It yields a highly aromatic wood and oil.

All the citrus oils, giving them a base note that very nicely complements them. It also works well with Rosemary, Chamomile, Eucalyptus and many more.

The Himalayan Cedarwood is also known, not unnaturally because of its growing location, as Tibetan Cedarwood. The ancient Egyptians used this oil to embalm and for cosmetics and perfumery. It has a long trading history with the Western Ancient World. The name Deodara comes from the sanskrit devadāru, which means “wood of the gods”, a compound of deva “god” and dāru “wood, tree”.