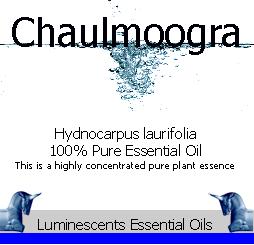 COLOUR: Chaulmoogra Essential Oil has a pale yellow opaque hue (due to its high fat content)

CONSISTENCY: Viscous, heavy and waxy – warm it to work with it

The Hydnocarpus laurifolia tree from which Chaulmoogra essential oil is distilled  grow around 15 to 20 metres high,and has a thick trunk with drooping branches, covered with long leaves. These latter, entire and rather big, are pointed. The small flowers, greenish white, form sparse clusters; male and female flowers appear on different trees. 6 to 7cm in diameter, the brown round fruit contain many 2cm long seeds rich in oil (roughly 60%). It is a common plant family in southern Asia.

The essential oil contains chaulmoogric acid and palmitic acid, and the fatty oil has been found to yield glycerol, a very small quantity of phytosterol and a mixture of fatty acids.

Once used in the treatment of skin diseases, scrofula, rheumatism, eczema, and as a counter-irritant for bruises, sprains, etc., and sometimes applied to open wounds and sores

Used as traditional medicine in India since ancient times to treat Leprosy and skin diseases. In southern India, The essential oil has been used for a long time to treat chronic skin diseases, wounds and ulcers. In England, It is sometimes still used in veterinary practice

According to a pre- Buddhist legend, a Burmese king stricken with leprosy voluntarily exiled himself to the jungle. There, he chose to reside in a hollow tree and heal himself by eating the fruit and leaves of Taraktogenos kurzii, or the “Kalaw” tree. Chaulmoogra was later identified as a source of chaulmoogra oil, an age-old leprosy treatment.

A physician is reported to have used chaulmoogra oil in ancient Egypt. Another early reference to the oil was made in the writings of the Sushrata Samhitas, dating back to 600 B.C. in India. The oil has long been widely employed as an accepted treatment for leprosy in China and India. Americans sought out chaulmoogra in the early 20th century until the development of a synthetic anti-leprosy medication in 1941. Botanist Joseph F. Rock brought the oil to the United States when he returned from an expedition in the hinterlands of the East that had been sponsored by the U.S. Department of Agriculture. In recent times, the efficacy of chaulmoogra in treating leprosy has been challenged and probably quite rightly so.