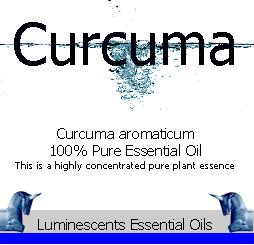 SCENT: Curcuma essential oil has the same spicy, fresh woods aroma as the powdered spice Turmeric used in Eastern cuisine. Many would argue that the oil is more brilliant, and more aromatic.

Curcuma is a perennial plant with rhizomes or tubers which are a deep yellow/orange on the inside and are often around 2 feet long. It is a member of the ginger family and is a cousin of Turmeric with which it is often confused.

It has no known aromatherapy associations.

Curcuma essential oil is viewed as a strong relaxant and balancer. It also has historical ayurvedic applications as an antiseptic, and for skin care.

The traditional use of Curcuma is still in India as an antiseptic. It has been in very wide use by women for skin care, particularly to discourage facial hair and acne. Curcuma is often compared to its cousin Turmeric – a very well known spice around the world. The name derives from the Arabic word kurkum for yellow, which refers to the colour of the rhizomes or the flowers of Curcuma longa.

As with Turmeric, Curcuma may cause skin irritation.