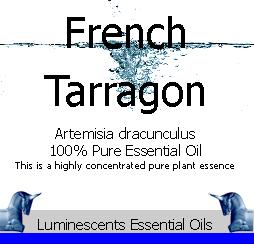 SCENT: Tarragon Essential Oil has a sweet anise like scent that many find appealing.

COLOUR: Tarragon Essential Oil is a pale yellow to green in hue

Tarragon Leaf (Artemisia dracunculus) from which French Tarragon Essential Oil is distilled, is a perennial herb in the family Asteraceae related to the wormwoods. It is native to a wide area of the Northern Hemisphere from easternmost Europe across central and eastern Asia to western North America, and south to northern India and Mexico. The North American populations may however be naturalised from early human introduction.

It is also known as Estragon and Dragon’s-wort.

As a digestive aid it is used for its culinary attributes but is also used for toothache and is considered an uplifting oil.

It is one of the four fines herbes in French cuisine and works well with chicken, fish and egg dishes. The herb is the main flavouring component of Béarnaise sauce.

The leaves (dried or freshly bruised) are steeped in vinegar to produce a popular flavoured vinegar.

Tarhun is a Tarragon based drink popular in Armenia, Azerbaijan, Georgia and, by extension, Russia, Ukraine and Kazakhstan. The drink, is made out of sugary tarragon concentrate and colored bright green.

In Iran, the herb is used as a side dish in sabzi khordan (fresh herbs), or in stews and in Persian style pickles, particularly khiar shoor (pickled cucumbers).

In Slovenia, it is used in a variation of the traditional nut roll sweet cake, called potica.

In Hungary a popular kind of chicken soup is flavored with the herb.