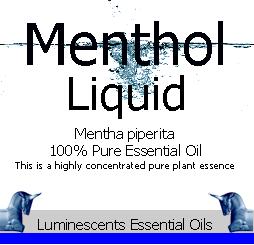 STRENGTH OF AROMA:  Strong and penetrating

Menthol Liquid is derived from the plant Mentha piperita (Peppermint). This perennial herb may grow up to 1 metre in height, and it has long, underground runners by which it is easily propagated. It is not strictly an essential oil inasmuch as it is obtained by de-mentholising Peppermint into crystal form and then making a liquid from the resultant crystal formations. I suppose it could be best described as liquidised Menthol Crystals. It is almost always described as an essential oil simply because its characteristics are virtually identical.

It has been used as a flavouring for centuries, but also has applications in aromatherapy when applied to sore muscles or in combination with other products such as in a pain relief balm. It is often referred to as having a cooling effect just like peppermint itself

While Peppermint Essential Oils that have been derived from Mentha piperita plants have a long history, Menthol Liquid has been a more recent addition based on modern science. The natural process involves de-mentholised Peppermint oil from which menthol has been removed by crystallization.

CAUTIONS:Menthol can be sensitizing, particularly in concentrations. Aromatherapists recommend that this product be used in moderation.