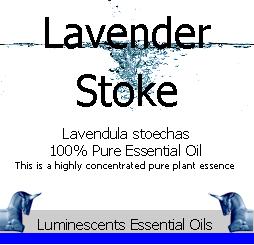 SCENT: Lavender Stoechas essential oil smells very strongly, as one might expect, and is now considered one of the most fragrant of all Lavender oils, however, rather than a floral aroma it is very, very resinous in character.

Lavender Stoechas (Stoke Lavender) Essential Oil (lavendula stoechas)  is an evergreen shrubby Meditteranean perennial which has been grown commercially for various uses including aromatherapy. It is often called Topped Lavender or even more frequently Stoke or Spanish Lavender