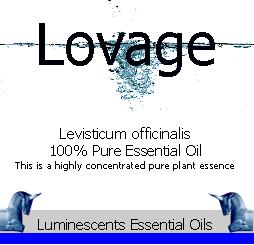 SCENT: Lovage Essential Oil has a very unique, spicy warm, rich – root like odour. Many consider it to be a very pleasant scent.

Lovage Essential Oil is from the large perennial herb which can grow up to 2 meteres high. A hollow stem and thick, dense ornamental foliage are characteristic of this plant which smells and tastes a little like celery.

A herb of historical uses, its reputation has been built upon uses for oedema, skin problems, menstrual irregularities, and fever.

The Garden Lovage is one of the old English herbs that was formerly very generally cultivated, and is still occasionally cultivated as a sweet herb. Lovage was used as a medicinal herb plant in the fourteenth century. Its reputation is believed to be founded largely on its pleasing aromatic odour.