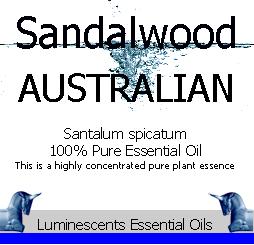 SCENT: Sandalwood Australian Leaf essential oil is sweet, rich, woody, exotic and lingering. oriental, luxurious, and balsamic with deep & soft aroma. Be aware, however, All Sandalwoods fail to impress until they reach body temperature when the luxuriant fragrance is all too evident.

Sandalwood Australian Leaf Essential Oil is extracted from only the leaves of teh Australian Sandalwood which is Santalum spicatum  from plantation trees in Western Australia.

Western Australian Sandalwood is a viable, environmentally friendly tree considered to have higher anti-microbial and anti-inflammatory properties than its cousin and superior fragranced Indian Santalum Album species which is endangered.

Sandalwood Australian is NOT an endangered tree. This tree is parasitic, burrowing its roots into nearby trees to gain sustenance for the first seven years, leaving the other to die. To produce oil this tree must be over 30 years old, preferably around 40-50 years when it has reached its oil production peak.

This particular species is not on The CITES registered endangered species list and can be freely purchased but it is still rare-ish and expensive although cheaper than Santalum album derived oils.

Some thirty species of sandalwood occur throughout Asia, Australia and the Pacific region. Six of the species are native to Australia. One species, Santalum spicatum, is presently being harvested in the Goldfields region of Western Australia. The high value of the wood and the oil has led to a steady decline of native sandalwood trees and increasing efforts to establish plantations.

It is currently endangered and consequently very expensive. Although all sandalwood trees in India are government-owned and their harvest is strictly controlled, many trees are illegally cut down and smuggled out of the country by local gangs. Sandal essential oil prices have risen by up to $1500-2500 per kg per year in the last 5 years. Some countries regard the sandal oil trade as ecologically harmful because it encourages the overh arvesting of sandalwood trees. So Australian Leaf Sandalwood, being environmentally friendly is a welcome addition to the cornucopia of essential oils available.

West Indian sandalwood (Amyris balsamifera) is not a member of the sandalwood family; the chemical components of Amyris essential oil are entirely different from those of the oil obtained from plants in the Santalum genus.